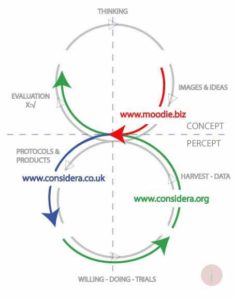 “At the end of the eighteenth century the universally prevailing view was that there was no science to explain living phenomena in the sense in which physics, for example, is a science that explains [inanimate] things. Kant, in fact, tried to establish a philosophical basis for this view.

Above all, one has committed a serious error in this. One believed that the method of inorganic science should simply be taken over into the realm of organisms. One considered the method employed here to be altogether the only scientific one, and thought that for “organics” to be scientifically possible, it would have to be so in exactly the same sense in which physics is, for example.”

In my search for the science of organics, some of the reading was not available in English – Hugo Erbe, Enzo Nastati & The Wheatsmith – or not collected together – Flowforms & Kaviraj. Such a ‘new’ approach needs to be tested in practice because results are the arbiter between different paradigms, so all of the books here, directly or indirectly, are practical ones. They are about things that can be done. Nothing would please me more than if collaborators were spurred to activity by these publications. Please report back.